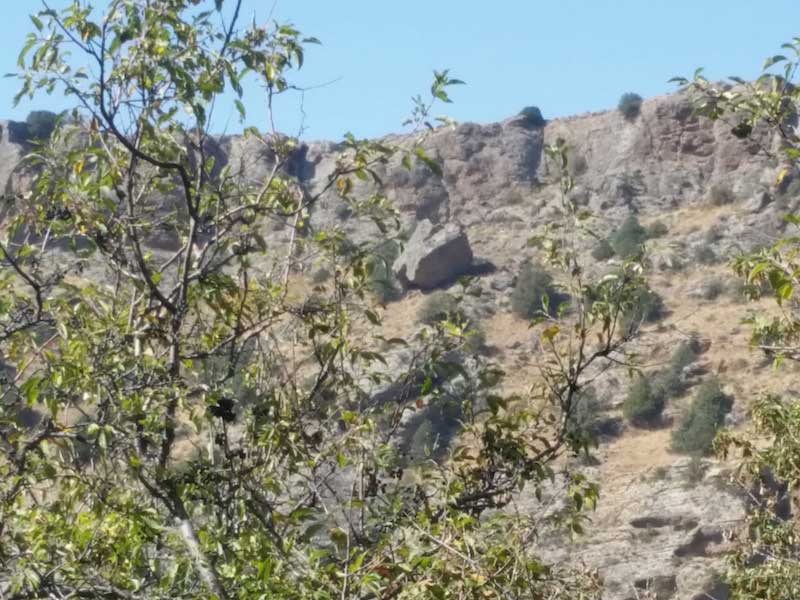 The apple grove at Taldybulak was both awe-inspiring and a disappointment – a very impressive grove of tall, old apple trees (as well as many other species) but no fruit.

Svetlana said that the problem was unseasonal snow in spring had killed all the blossom in the valley, thus no apples. She said that often in autumn the path through the grove is unusable by horses, because of all the apples on the ground – round and in multiple layers. It was such a disappointment to miss this sight! Still, we did get to enjoy both the picturesque ambiance of the grove, and the striking contrast it made with the bare, rocky outcrops and rockfalls at the sides of the valley. And I must admit to hugging the odd tree…

These trees are quite different to the ones in Aksu canyon yesterday. They are taller, and generally with a single or double large trunk. Svetlana says they tend to form single trunks as they age, partly through shading making the lower branches superfluous, but also through bears attempting to climb up the trees to reach the fruit and breaking off the lower branches!

Understorey plants included: lots of tarragon, red clover, black raspberry, violets, vetch, various umbelliferon, a local Mentha, and in the shrub layer roses – including one collected for tea in winter that stains your fingers brown with oil when you harvest – and barberries as yesterday. Again, apple trees often grew together with the Mahaleb cherries. In the apple grove itself there was also some green grass –

like yesterday, the only place we saw much grassy understorey was in the apple groves. Maybe the grass likes apples, or they both like the same conditions?

Not all the apples occurred in groves, with single or clustered trees of a range of ages along the stream.

Other highlights included meeting my first wild carrot, and some marten poo on the path – bright orange and full of hawthorn and barberry seeds.

We also walked through an old, neglected almond orchard planted in the 50s, and saw from afar a similar apricot orchard starting to show a spectacular red autumn foliage.

Walking in town after lunch I was taking a photo of a particularly picturesque apple tree in a front garden (Mark: ‘When are you going to get sick of taking photos of apple trees?’ Me: ‘Give me at least another 48 hours’), only to hear ‘hello’ coming from the tree. We hadn’t realised he was there, but there was a man up the tree picking apples. He seemed very chuffed at tourists taking photos of him, and urged us to take more.

Apple trees are very common street and garden trees. Ramshackle shacks sport apple trees in their yards, and outside big swanky houses you can see apple trees poke over the high fences – and everything in between. It is nice to see fruit trees appreciated in such a way for the fruit, the amenity and the shade. Plantings of useful trees are far more common here than in Australia – shade is more appreciated (fewer air conditioners?)

In the afternoon we took a trip to a commercial apple orchard – a big splash of green on the bald rolling hills. The line of Lombardy poplars was testament to their windbreak ability, with the wind dropping substantially in the areas they protected. Here again though there were very few apples – maybe the same late snow as had occurred in the hills above? However the understorey was particularly rich and impressive including lucerne, rue, vetch, clover, tarragon, dandelion, oregano, dock and a rushy-looking grass species.

An irrigation pipe had recently been put in – Svetlana said that last time she had been there, there was only the channel system. Now there was 12mm polypipe and drippers.

There had also been a windbreak of some sort of leguminous tree that had recently been cut down but was coppicing vigorously. Svetlana suggested they may have been removed, as people do not like this plant as it spreads and seeds everywhere.

Seeing no one in the area, and very few apples, we drove on to another part of the orchard where we were met by a man on a tractor with a crate of apples on the back. He introduced himself affably and told us about the apples – a local variety called ‘Perfect’; they were about to be driven to a coldstore 30 km away. He whistled up the owner of the orchard who came down the rows and promptly told the tractor driver to get back to work, before he had even introduced himself.

After greetings, the exchange started with a joke, Svetlana asking him how the harvest was and what the best bearing tree was, Alshin pointed to a very small tree laden with red fruit saying with a laugh that this had been the best tree this year. It had indeed been a bad year! He is a retired train driver, having only come to orcharding in his retirement – he stated he didn’t know everything about orchards, but he did know everything about trains.

He answered our questions via Svetlana’s translations and told us a bit about the orchard – they have few pest problems, just a few apple ‘worms’ (codlin? – I’ve seen a couple and this is what it looks like) but he tries to be as organic as possible using few treatments and horse manure as fertiliser. When I complimented him on his understorey he looked a little uncomfortable and said he had not had time to slash. I told him that organic growers in Australia valued a diverse understorey, but I’m not sure he was convinced. The irrigation had been a recent (and expensive I gather) investment. He quoted a Kazakh proverb ‘Better a channel than 6 days of rain’ as his reasoning.

They grow five types of apple – with the top ones being… red delicious and yellow delicious (!!!). Yes, we’ve come halfway across the world to see the home and centre of diversity of the apple and we are standing in an orchard of deliciouses. Even in a country where I have yet to see any golden arches, or anyone drinking Coke*, globalisation is here…

As a parting gift we were given armfuls of red and golden apples. Ho hum. Svetlana was happy to take them home however.

There was time before dinner for a walk to the shop (for some vodka). Our timing was excellent as it coincided with the livestock returning for the evening – horses and cattle coming home along the main road, then an even bigger mixed flock of sheep and goats. As their houses approached, the cattle were happy to peel off from the herd and wait patiently at their gates to be let in. The sheep and goats however were being separated into various flocks in different house yards as we approached. The stock all seemed to know where they were meant to be going and with whom, but didn’t necessarily want to do it, or do it at the speed that their shepherds suggested.

We watched as a car drove slowly off the road and onto the side path to go around the flock, thinking how nice it was that the livestock were given priority on the road. This impression was shattered by a shiny black four wheel drive barrelling down the road and straight through the flock, tooting vigorously the whole way.

Apart from two small goats that frequent a particular nature strip in town (untethered), mixed flocks are the only way we have seen goats in Kazakhstan.

I’m now sitting at the table after dinner and eating halva and drinking tea. Tea is generally a nice light but fragrant version, generally brewed with fruit – we have had both a barberries version and a rosehip version – or with lemon added later, and no milk.

*Not that Coca-Cola is not for sale here, it is – I just haven’t seen anyone drinking it yet. The main use for Coca-Cola seems to be reusing the bottles for the fermented milk products available in all good general stores and marketplaces.