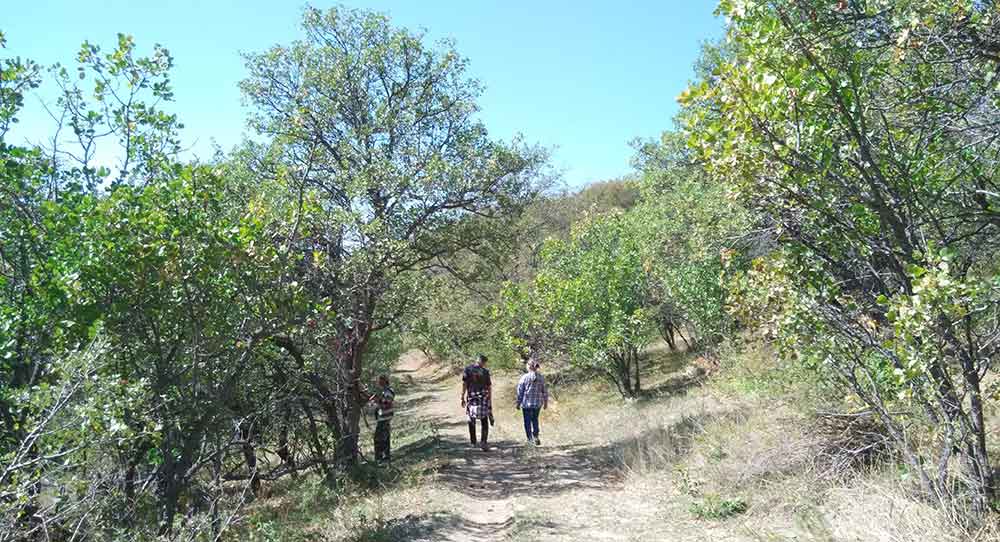 Today more apples. Mark is starting to complain about the amount of apples on this trip.

We were in quite a different environment today – hotter, drier, and more exposed than the sites we have been to so far (apart from the initial south facing slope at Aksu canyon). We walked along a creek with abundant willows (S. albus) and raspberries near the waterline, but dry grass immediately up the bank. The predominant trees were wild pistachios and hawthorns, with some accompanying apples and Mahaleb cherries. Svetlana explained that the pistachios are happy to grow anywhere, but the apples only grow where there is a bit of a depression, even if it is only very slight.

However there were no apple fruits, nor pistachio nuts, again due to the late snow in spring. Fruit-wise the abundant hawthorns (Crataegus pontica) were the star of the show – these bore big, yellow fruit that look like little apples and were not only edible but pleasant enough to enjoy nibbling on the whole way. We also ate black raspberries along the creek.

Some channels had been dug to distribute water from the track onto the hills. This had been done in Soviet times to help the pistachios and hawthorns but now, as Svetlana explained, this was ‘old thinking’ and it is expected that nature is left to itself, rather than helped along.

We could also see that a neighbouring hill had been planted out with trees in rows – these were more pistachios and edible hawthorns, also planted in the Soviet era to increase food security as well as reforest the hills – a very impressive initiative!

Besides encountering the odd apple tree near the path or creek, we went up a gully with a large stand of apple trees, and once again found ourselves in a wild apple wood, this one a bit more open and spaced out than the previous ones. Again there were no apple fruit – but it was still a wonderful feeling to be surrounded by these trees.

There were a couple of new plant surprises for me today too – more and more plants that I am very familiar with turn out to originate here. The first was as we stepped out of the car into a (deliberately planted – nice to see edibles used in this way!) walnut forest: a ground cover of lemon balm. Obviously juglone has little effect on it – there were few other plants present.

Later, amongst the grass as a companion to the pistachios, was a good stand of liquorice – I must try this pistachio/liquorice combination at home. On the way back to the village we stopped at a beautiful spring-fed lake and at the side of the water was not just watercress (fairly ubiquitous wherever you are), but what is commonly known in Australia as Lebanese cress*. This was a fill-in salad green used regularly in the Gravel Hill Gardens CSA I used to run, and its carroty taste has made it a favourite for me as an excellent pond, or moist area, plant. I might start calling it ‘Kazakhstan cress’ now…

Lunch was by the creek back at a ranger station (there was no sign of any rangers today being a Muslim holy day with families getting together for meals) in a forest of ash and walnut dropping their yellow leaves into the clear water. Being Australian we don’t get deciduous forests and to be in one in autumn when the leaves were blanketing the ground and falling poetically from the trees was a real treat. Svetlana took a photo of us eating saying that it looked like something from a tourist brochure (and added later: ‘not a tourist brochure from Kazakhstan’).

The trip there and back made for interesting viewing from the car window. In particular, we went through a town with a large Uzbek population where the houses shared an end wall with each other, making one long line of buildings along the street. Svetlana explained that Uzbeks have a much stronger culture of vegetable growing and thus need less space than the Kazakhs who need space for their livestock as they have a more pastoral culture. The sheltered courtyard formed by the Uzbek buildings would also provide a useful microclimate for vegetable production.

The space needed for livestock in the Kazakh home is not large however; they are taken out to range by day and are put in the barn at night and in the winter months when they are fed with stored hay – they don’t need room to graze in Kazakh yards.

The homestay we are at has 5 cows, some for milk and reproduction, and a couple growing for meat. For the seven warm months of the year they pay a monthly fee per head for someone to take the cattle out to pasture for the day and return them at night. This herder takes full responsibility for the animal during the day – if it is lost or killed, he must pay to replace it.

*Not the same thing that is often called ‘Lebanese cress’ in other parts of the world – and I have yet to track down the scientific name for it.