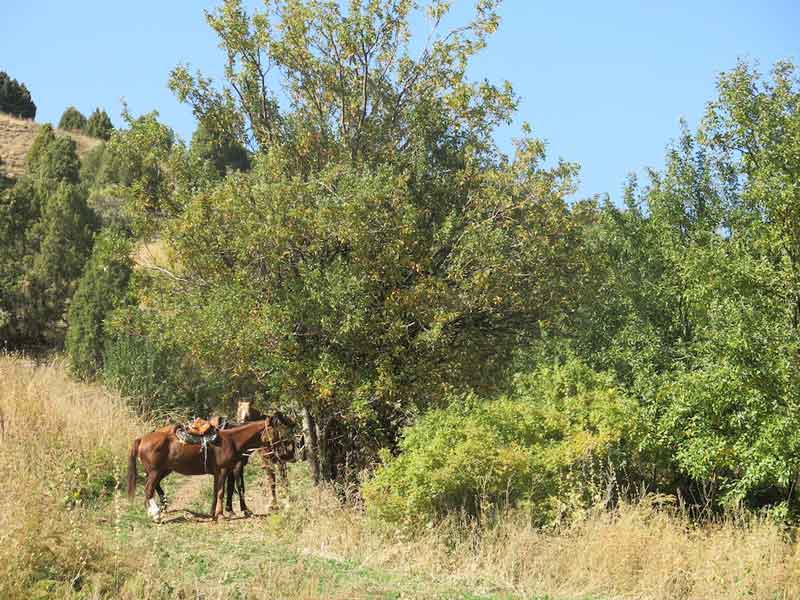 A horse ride across the steppes up another canyon today, with an impressive waterfall at the top. There were also plenty of apple trees on this jaunt, and unlike the previous two days, many of these were bearing fruit.

It wouldn’t have seemed right to come to Kazakhstan and not ride a horse – they are so much a part of the culture. They are still used

for transport, as well as eating. It is interesting to contrast this with the attitude to horses in Australia where most people would be quite disgusted by the thought of eating horse meat, but do not see a problem with locking single horses in small paddocks for teenagers to ride on the weekends. The free-ranging herds of Kazakh horses able to socialise and forage their own feed, even if they are destined to become horsemeat, seem to have the better life!

Our ranger, the young man who was so disengaged on our first trip into the Nature Reserve, came into his own on a horse, showing off his riding skills on the way to the canyon and became for more engaged with us too, picking apples from horseback from the trees growing along the track for me to sample.

These trees were in a different habitat again – occurring singly or in clusters along the side of the track rather than in dense groves. The different ways that we had seen the apple growing wild has given me some insight into why it has been such a successful plant in so many areas of the world – it is so tough and adaptable. Although in the hottest, driest areas the trees are restricted to valleys and ditches, albeit often quite shallow ones, they still grow and bear fruit quite happily in the 400 mm rainfall.

We also rode past some newly established apple orchards. All the new orchards we have seen have been apples, and all irrigated by ditches carrying water from springs.

This is our last day in the foothills and apple groves – tomorrow we head north onto the dry steppes.

So what has this experience given me overall? Primarily, an even greater appreciation of the apple than I had before. Growing in such a range of conditions – on hot rocky slopes and relatively moist riparian zones, coping with temperatures ranging from the high 30s to minus 20s (Celsius) – it is no wonder that the apple has proved to be such an adaptable plant all around the world. I also appreciate the apple as a tree: we call it a ‘tree’, but the ones we normally see and design for are more akin to a bush – a real apple tree is huge! I also have a deeper understanding of an apple tree’s place in an ecosystem, and a range of new ideas for companion planting.

The best part of the trip was the experience itself though: the excitement of seeing so many familiar plants in a natural setting and the feeling of deep awe to be in a grove of ancient apples…